After seven years of presidency: European Fishmeal has a new president

The annual General Assembly of European Fishmeal (EFFOP) was held September 23rd, 2021, as an online session.

After his nomination, Frank Trearty thanked his successor for a job well done, and shed light on his ambitions as president of EFFOP:

“Johannes (Palsson, red.) has done a great job taking the association where it is today. We as an industry have a great benefit in cooperating in the European Fishmeal association. As we are looking into a great number of emerging challenges, the need for strong cooperation and effective secretariat is even greater in the future”.

As Frank Treaty accepted the Presidential role, the board decided unanimously that his vacant seat as Vice President should be taken over by Garðar Svavarsson, who joined the board as the representative of the Icelandic fishmeal producers instead of Johann Petur Andersen.

The board is now as follows:

Before the General assembly, the three most important certification bodies in the fishmeal sector, MSC, ASC and Marin Trust, were invited to give a presentation on where we are heading in the world of certification. EFFOP members can see the presentations on the member’s page in the conference folder.

Next year’s General Assembly will take place as part of the biennial members’ conference in Skagen, Denmark, taking place from June 1st to 3rd, 2022.

The recorded presentation from the EFFOP Certification Webinar

DG MARE on study tour: If we want to be sustainable, there is no way around this

DG MARE was invited to Skagen by the Danish Ministry of Food, Agriculture and Fisheries.

The purpose of the visit was for the Danish industry to demonstrate their technical solutions to the handling of landings of unsorted pelagic fish. Special attention was given to a specific requirement in the EU Control Regulation that the fishermen must estimate in their logbook the exact weight of all bycatches above 50 kg in the catch. A requirement that is impossible to fulfil in pelagic catches.

Pelagic fisheries are carried out by fishing vessels using pelagic trawls and purse seines. The pelagic landings are unsorted because the fish are pumped directly from the trawl or purse seine into the tanks of the vessels with no sorting taking place on board. Small volumes of other species than the target fish can be caught as bycatch. Bycatch in the pelagic fishery is not in itself an issue, and most sustainable fishing will include some small levels of bycatch – the key is proper management, accountability, and control. Therefore, sampling and registration of bycatch is so important when the fish is landed for production.

In Denmark, the sampling and determination of all species in the catch follow strict sampling plans embedded in the national regulation. When unsorted pelagic landings are landed for fishmeal and fish oil production, the total catch and bycatch is registered by certified third party inspectors, and the total amount of bycatch from each species is calculated and counted against the quotas. In this way, we can ensure that all caught species are registered and fished within the quotas. 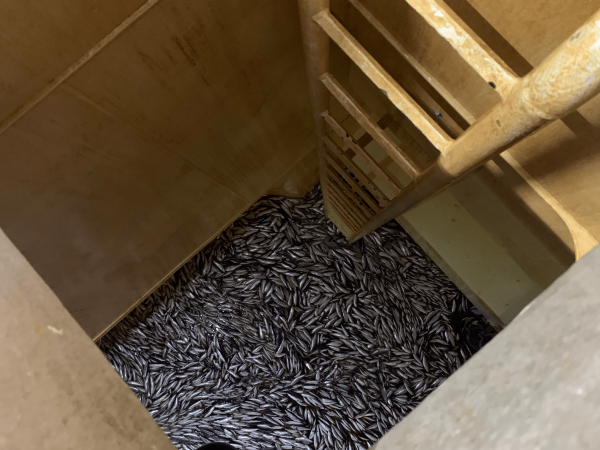 An industry dedicated to transparency

Summing up on her visit to Skagen, Charlina Vitcheva complimented what she found to be a very professional industry:

“This professional industry has demonstrated today, with use of modern technology, that it is highly dedicated to transparency and that trust is at its core”.

The dedicated focus on trustworthiness from the industry is underlined by managing director of the Danish and European fishmeal associations, Anne Mette Bæk: “Fish stocks are natural resources and we, who use them, has the responsibility to take care of their sustainability. Therefore trust is part of or social contract with society, a license to operate and as such a key focus of ours” says Anne Mette Bæk. “With the use of independent third-party surveyors to handle the weighing and species sampling we have developed a transparent and effective system that cannot be compromised”.

The host of the day, chairman of European Fishmeal and CEO of Denmark’s largest fishmeal factory, FF Skagen, says that:

“As we in the fishmeal industry want to be considered sustainable, there is no way around this. We have worked hard to implement modern technological solutions at the plant with a dedicated focus on sustainability and traceability. All based on the ‘Industry standard for draining and weighing of unsorted pelagic landings for fishmeal and fish oil production’ developed and signed by all members of European Fishmeal. We strongly encourage all fishmeal factories operating around the Northeastern Atlantic and Baltic Sea to introduce similar systems”.

And he is supported by the chairman of Marine Ingredients Denmark and CEO of TripleNine Group, Jes Bjerregaard:

“In Denmark, we probably have the strictest rules concerning the landing of unsorted pelagic species in the world. But the challenges it has posed is by far outweighed by the fact, that the rules guarantee that one kilo is always one kilo”.